Kansas Highway Patrol Trooper Gustavo Ramirez told reporters that they could confirm at least two people were killed in the crash in Olathe, about 22 miles southwest of Kansas City, but the exact number of fatalities was unknown.

“At this point and time, we have no information as far as what happened prior to the crash. We don’t know what caused the crash, and we don’t know any additional information of the occupants of the aircraft,” he said.

He said they received a call about the crash at 4:20 p.m., and when they arrived, local police and fire were already on the scene.

Mike Hall, captain of the Olathe Fire Department, said they were the first to arrive at the single-engine plane, which was engulfed in flames.

“You could see a black column of smoke as you approached the airport,” he said.

Fuel was leaking from one of the wings, and fire crews used chemicals and foam to put out the fire, which was extinguished some 20 minutes later, he said.

“When you see the sight yourself, it’s very tragic looking,” he said, adding that responding crews most likely realized upon arrival that they were dealing with a recovery mission, not a rescue.

“More than likely they were thinking recovery,” he said.

The National Transportation Safety Board said it was investigating the crash. A tweet from the NTSB said the plane was a Mooney M20S. 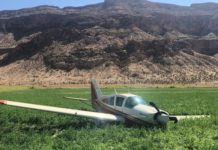