Oct. 14 (UPI) — Three Australian skydivers died Friday after colliding with each other in the middle of their jumps, authorities said.

“A solo skydiver may have collided with tandem skydivers in mid-air with their parachutes failing to deploy correctly,” a statement from Queensland Police said.

The dead included two men in their thirties and a woman in her fifties, officials said.

The accident occurred at Mission Beach, a popular tourist spot on Australia’s northeastern coast near the city of Cairns.

The jumpers were not immediately named, but police said the dead men were instructors at Skydive Australia.

“Any accident involving skydivers is not good for anyone,” Senior Sgt. Peter Williamson said.

Skydive Australia said one of the instructors had performed thousands of jumps. 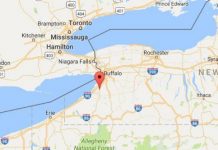