Oct. 30 (UPI) — Three Amish children died Sunday when a truck crashed into a horse-drawn buggy they were riding in, Michigan State Police said.

Two girls, ages 7 and 9, and a 12-year-old boy, were riding in the buggy with six other people in Evergreen Township in central Michigan, about 60 miles north of Lansing, when a red Dodge 4×4 pickup truck crashed into them. The three children died and the other passengers were taken to the hospital with life-threatening injuries, police said.

The Daily News reported that the truck and buggy were traveling on the same road and going in the same direction when the impact occurred.

“I was sitting there at the TV, watching TV and I saw the buggies go through and I saw this red pickup go through, and all of a sudden I heard ‘bang,'” neighbor Alden Wernette told WOOD-TV.

The truck driver, who was not injured in the accident, has not been named. Authorities told Fox 17 he has been cooperative with the investigation and drugs or alcohol do not appear to be involved. 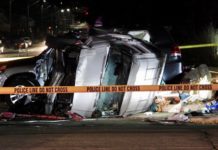