March 27 (UPI) — A manhunt was still underway Wednesday as only four of five inmates who escaped from a North Carolina detention center were back in police custody.

By 4:20 a.m., Tuesday, four of the five inmates who had broken out of the Nash County Detention Center were apprehended, but the fifth, 23-year-old Laquaris Battle, was still on the loose, Nash County Sheriff Keith Stone said.

The five inmateshad broken out of jail Monday at around 3:30 p.m.

They had forced their way through a fence that had recently been repaired and may have had an accomplice on the outside, Stone had previously said in a press conference.

“These subjects were last seen crossing the fence in the exercise yard,” Stone said. “They made their way into a wooded area and across a parking lot. They may have been picked up by an accomplice.”

Viverette and Horne made it to Hal Orr’s Inn in Rocky Mount, 15 miles away from the penitentiary, before they were recaptured Monday night.

Police deputies were led to the motel by a tip, Stone said.

Murphy and Ruffin were “captured in another county,” Nash County Sheriff’s Office said on its Facebook page Tuesday.

The Nash County Sheriff’s Office and the Twin County Crime Stoppers are offering a $1,500 reward for any information that leads to Battle’s capture. 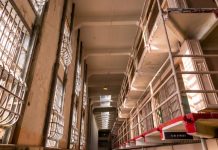 Colombia jailbreak may have been aided by drunk guard