PENSACOLA, Fla., Aug. 14 (Amy R. Connolly) — Dozens of U.S. Army Rangers who were learning to protect themselves from lightning strikes were hospitalized after being hit by the same.

The Army said 40 Ranger trainees and four instructors were “affected by a nearby lightning strike” as they were performing “lightning protection protocols” in an area near Eglin Air Force Base. All were taken to the hospital, where they were treated and released during the course of the day.

“The Ranger students and instructors reacted and got everyone proper medical care quickly,” Col. David Fivecoat, commander of the Airborne and Ranger Training Brigade, said.

The group was swamp training, conducted at Camp Rudder on Eglin Air Force Base, when a lightning warning within 10 miles was issued. The Army said the training was stopped, but one of the bolts hit near the platoon.

“Ranger students and instructors are tough. (The) students will return to training tonight and continue with increased medical monitoring as they try to earn their Ranger tab,” Warner said Wednesday night.

Florida is known to have the highest number of lightning strikes in the nation, averaging 1,414,284 strikes per year. Between 1959 and 2011 there have been 463 deaths, also a record for any state. 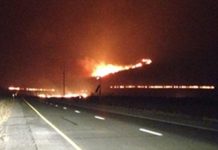 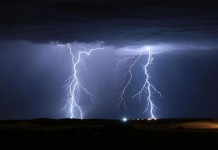