June 17 (UPI) — A van carrying 12 undocumented immigrants in Texas near the border with Mexico crashed during a pursuit with police and border agents, killing five, officials confirmed on Sunday.

The incident occurred in Big Wells, Texas, about 50 miles from the Mexico-U.S. border. According to KSAT-TV, Border Patrol agents attempted to pull the van over, but the driver did not do so. Dimmit County Sheriff deputies also pursued the van, which was allegedly going more than 100 mph when the driver lost control and caused it to tip over.

Four people were dead when emergency responders arrived. A fifth died later at a nearby hospital. All of the deceased were immigrants. Their names or countries of origin were not released as of Sunday night.

The driver and a person in the passenger seat were U.S. citizens. They both suffered injuries and are in custody.

The surviving immigrants have also been detained.

“We’ve seen this many, many times, in not only this county but other counties along the border,” Boyd said, according to CNN. “It’s a problem…This is, I think, a perfect example of why our borders need to be secure.” 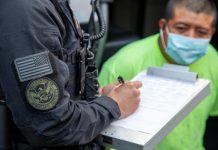