Sweetwater County District 1 Fire Chief Scott Kitchner told SweetwaterNow.com that between 50 and 60 railcars had flipped on their sides, including seven to eight tankers carrying liquefied petroleum, which are reportedly on fire.

The explosions have led to a 20-acre grass fire and potential onlookers are being told to stay away.

“People need to stay out of the area,” Kitchner told Sweetwater Now. “We have 100-foot flames and have had multiple explosions. This is a very dangerous situation.”

Multiple agencies have responded to the fire, including units from Sweetwater County Fire Department, Rock Springs Fire Department, the Bureau of Land Management and the Southwest Wyoming Regional Airport.

Body of man found in camper near Flaming Gorge Reservoir 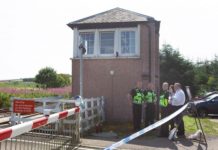