According to the U.S. Geological Survey, the 6.4 magnitude aftershock hit a short time after the first quake was recorded at 7:10 p.m. local time Wednesday.

The first quake was centered in Macerata, which is located about 140 miles northeast of Rome. The shaking was reportedly felt in the Italian capital.

After the second temblor struck, there were some reports of structural damage.

“It’s dark here, so impossible to determine if there has been any damage outside,” a resident in Penna San Giovanni told the European-Mediterranean Seismological Centre. “All services — electricity, internet — are still working normally.”

The quake struck about 5 miles below the surface, making it a relatively shallow seismic event.

There were no immediate reports of injuries. 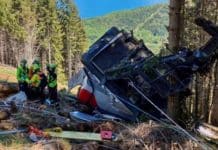