Sept. 23 (UPI) –At least seven students were killed and dozens more were injured when a school collapsed Monday in Kenya’s capital of Nairobi, officials said.

Communications manager Fred Majiwa said the incident occurred shortly after 7 a.m. when the top floor of the two-story Precious Talent Academy in Dagoretti caved in on the lower classrooms, Kenya’s The Star reported.

Majiwa said the building was made of iron sheets and wood beams and couldn’t brace the upper concrete floor.

St. John Ambulance said there were at least seven fatalities, while a Dagoretti government spokesman confirmed the death toll for reporters while adding that 57 others had been sent to the hospital for treatment.

Both Kenya Red Cross and St. John Ambulance Kenya said they had transported injured students to the Kenyatta National Hospital while the dead were being taken to the Dagoretti corner.

Most of the children at the hospital were being treated for soft tissue injuries mainly to the head and ribs, KNH communications manager Hezekiel Gikambis said, Daily Nation reported.

Moses Wainaina, the proprietor of the school, suspected the incident was connected to construction on a nearby sewer line, Capital News reported.

Rescue efforts coordinated by St. John Ambulance Kenya and Kenya Red Cross were underway in search of others possibly still lost in the rubble. 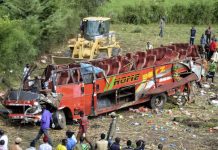