May 20 (UPI) — The 82 Nigerian Chibok schoolgirls captured by Boko Haram more than three years ago were reunited with their families Saturday.

Bahir Ahmad, the personal assistant to the president, announced the news on Twitter, writing it was an “emotional” welcome at the capital, Abuja.

“I am really happy today, I am Christmas and New year, I am very happy and I thank God,” said Godiya Joshua, whose daughter Esther was among those freed, in a report by The Telegraph.

The girls were released two weeks ago. The remaining 113 are supposedly still captured.

In 2014, 276 girls were kidnapped. Boko Haram released 21 of the girls in October and another 50 or so escaped on their own since being abducted.

“We have trust in this government, definitely they will rescue the rest safely and back to us alive,” said community leader Yakubu Nkeki.

Five commanders from the extremist group were exchanged for the girls’ freedom. Swiss government and the International Committee of the Red Cross helped negotiate their release.

Many of the girls, mostly Christian, were forced to marry and gave birth. Some have refused to return after becoming radicalized.

The girls are in government care as part of a nine-month reintegration program personally overseen by President Muhammadu Buhari. Human rights groups said that is too long for them to be away from home.

Families in the remote Chibok community had been waiting word on whether their daughters were freed. 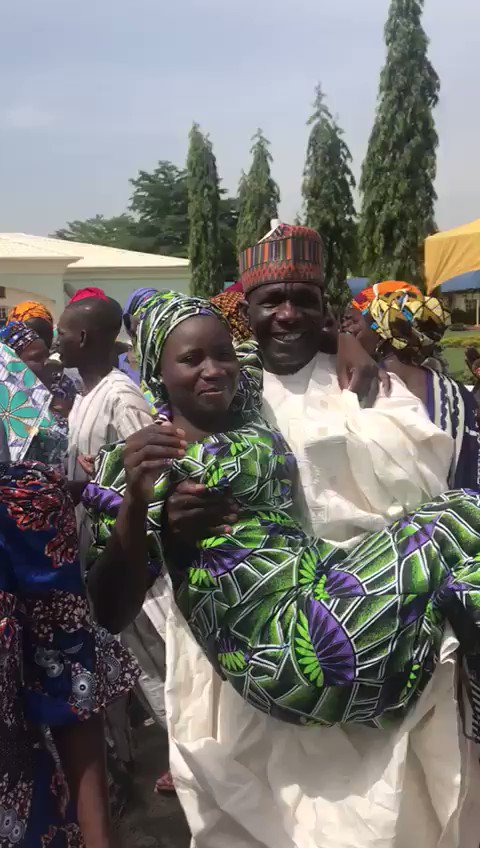 EMOTIONAL; After more than 3 years, the newly-released 82 Chibok girls reunite with their parents and their 23 schoolmates today in Abuja.