AUGUSTA, Maine, Nov. 8 (UPI) — Republican Maine governor and Donald Trump supporter Paul LePage was accused of voter intimidation Monday for telling college students his government will do everything it can after Tuesday’s election to verify they complied with state law.

LePage made the statement just days after controversial fliers were found on a college campus in Lewiston — which said students, many of whom are from out of state, must pay “hundreds of dollars” to register vehicles and change their driver’s licenses in order to meet residency requirements and vote.

The fliers, under the title of “Legal Advisory,” inform students that if they want to vote they must “Pay to change your driver’s license to Lewiston, Maine, within 30 days.” It also says students must “Pay to re-register any vehicle you have in Lewiston.”

The notice goes on to say, in bold type, “this includes a Maine state vehicle inspection requirement. Usually hundreds of dollars in total.”

It’s unclear who made and passed out the fliers on the Bates College campus.

“After the election, we will do everything we can that is allowed under state and federal law to verify college students who voted here are following Maine law, which is clearly displayed on the Secretary of State’s website,” LePage said in his statement Monday.

Critics say the fliers, by putting such emphasis on the mandates to pay, are clearly attempting to dissuade students from registering to vote — and that LePage’s pledge to verify compliance amounts to intimidation.

Later, the governor attempted to clarify the issue.

“Media has it backward. No need to establish residency to vote. If u vote, law says u declared residency, register car in 30 days,” he said in a tweet.

Maine Secretary of State Matthew Dunlap said the fliers “appear to be targeting college students in order to discourage them from registering to vote.”

“You have a right to vote,” he told WCSH-TV Monday. “The problem with these fliers is that it makes an inference that if people don’t do these things … there’s going to be some investigation of them, and that’s not the case.”

The secretary of state also illustrated that if a college student lives and votes in Maine, they have already or will already register their vehicle there and update their driver’s licenses accordingly. The error, he said, is the flier’s inference that the vehicle fees are related to voting.

“The governor’s statement seems designed to make college students afraid to vote,” Zachary Heiden, legal director at the ACLU of Maine, said in a statement. “Voter intimidation and harassment is illegal, and we call on the Department of Justice to investigate the intent of the governor’s comments.”

The ACLU also questioned why it seemed LePage singled out college students in his statement.

“None of [the vehicle and license] requirements have anything to do with voting,” Heiden added. “The statement threatens students who vote with investigation and prosecution related to motor vehicle operation and ownership.”

“The false information contained in these fliers is a deliberate attempt to suppress the millennial vote,” Maine Democratic Party Chairman Phil Bartlett added. “There is nothing in Maine law that states that college students must change their driver’s licenses in order to vote.” 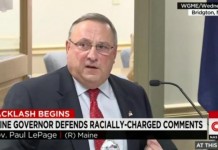