May 6 (UPI) — Civil rights and corporate accountability activist groups on Monday encouraged Facebook shareholders to vote against keeping CEO Mark Zuckerberg as chairman of the board, citing his majority voting rights and the company’s user privacy problems.

The groups, Color of Change and Majority Action, notified the Securities and Exchange Commission in a filing about their intent to advise Facebook’s shareholders. The move came after the Facebook board of directors declined to institute shareholder proposals for reforms to governance and best practices.

“To date, the company has produced no comprehensive accounting to shareholders of the causes of its failures of governance and oversight, let alone a comprehensive plan to rectify them.”

Kasargod-Staub said “overwhelming majorities” of Facebook shareholders have indicated they wanted stronger oversight through the introduction of an independent chairman, as well as a one-share, one-vote system.

The organizations said that with 57.7 percent of the voting power in the company, Zuckerberg holds control over Facebook without adequate checks.

“Facebook’s tiered governance structure is a threat to the civil rights of its black users and to the financial interests of its shareholders,” Color of Change CEO Rashad Robinson said. “Lasting change to address the misinformation, discrimination, violent movements and data breaches that put users, especially black users, at risk cannot be subject to the whims of a single person.”

The groups also called for all Facebook directors in uncontested elections to be elected by holders of a majority of votes cast and for the company to expand transparency by reporting on its gender pay gap and business structure.

Color of Change said it has worked with Facebook for more than four years and during that time negotiated to have Facebook conduct a civil rights audit, which it publicly released. Last year, the group said, 35 percent of outside shareholders voted against Zuckerberg for the board.

Earlier this year, Zuckerberg announced a shift in Facebook’s focus toward privacy after years of criticism over the company’s handling of users’ personal data.

Cambridge University academic Aleksandr Kogan and his company Global Science Research used the quiz app “This Is Your Digital Life” to gather data on 270,000 users — and the users’ friends, who did not participate in the quiz — which it then shared with data mining firm Cambridge Analytica in 2015. The company used the demographic information from 87 million Facebook users to target political advertising.

In March, whistle-blower and Cambridge Analytica co-founder Christopher Wylie revealed the data mining company was holding onto Facebook user data without the users’ consent even after Facebook told the company to delete it. 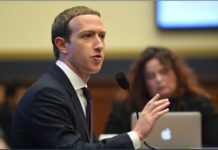