Aug. 5 (UPI) — Anne Heche, the prolific television and stage actress who also starred in the film “Donnie Brasco,” has been hospitalized in critical condition after her car crashed into a California home.

Heche, 52, was speeding down a street in Mar Vista just before 11 a.m. on Friday when her blue Mini Cooper crashed into a home on Walgrove Avenue, causing the two-story structure to catch fire, the Los Angeles Fire Department said in a statement.

It took 59 firefighters more than an hour to access the fire at the home and extinguish the flames caused by the crash, fire officials said. No other injuries were reported.

Before that crash, Heche is also believed to have crashed into the garage of an apartment complex before speeding off, TMZ reported.

Police sources told the Los Angeles Times that Heche suffered significant burns from the second crash and was determined to be acting erratically and under the influence of alcohol, bottles of which appear to be seen in photos from the first crash published by TMZ.

The outlet also obtained footage that purports to show Heche’s car tearing down the street before the first crash is heard.

Heche, who won a Daytime Emmy in 1991 for “Another World,” is also known for dating Ellen DeGeneres in the late 1990s.

Days after the couple split, according to ABC News, Heche was picked up by sheriff’s deputies in Fresno County and taken to a nearby hospital after she made statements to law enforcement that “she was God and was going to take everyone back to heaven with her in some sort of spaceship.” 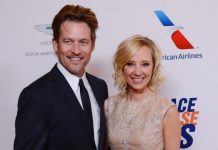