June 13 (UPI) — The world is “considerably less peaceful now” than it was a decade ago, as the Middle East has become more violent and terrorist attacks have risen, the annual Global Peace Index said Thursday.

The 103-page analysis, conducted by the Institute for Economics and Peace, evaluates and ranks 163 nations and territories based on safety and security factors. It concluded in its 2019 report that although there’s less peace compared to a decade ago, the world is “very slightly” more peaceful in the last five years.

“The index has deteriorated for eight of the last 12 years, with the last improvement in peacefulness … occurring in 2014,” the report states. It ranks Iceland as the world’s most peaceful country, for the 11th year in a row. New Zealand, Austria, Portugal and Denmark round out the top five.

The least peaceful nation — Afghanistan, which took over the bottom spot from Syria a year ago. This year, Syria ranks second-to-last, trailed by South Sudan, Yemen and Iraq. This is the first year Yemen has ranked in the bottom five.

“The [index] reveals a world in which the conflicts and crises that emerged in the past decade have begun to abate, but new tensions within and between nations have emerged,” the study states.

The report notes that terrorist attacks are almost a daily occurrence in Afghanistan after 18 years of fighting. Peace talks have gained momentum in recent months, but the Taliban and Islamic State still have a presence there.

Afghanistan is “now the world’s most violent conflict with the highest number of deaths from war and terrorism,” Mohib Iqbal, a research fellow at the institute, told Radio Free Europe.

Syria, meanwhile, “experienced a decrease in violence after the defeat of [the extremist group Islamic State] and the localization of the ongoing conflict in the country.”

The United States, meanwhile, is nowhere near the top of the list. It’s in the bottom quarter, in fact, at No. 128.

“Peace in North America deteriorated last year, recording the second-largest regional deterioration,” it said. “Canada showed a small improvement in overall score, but the deterioration in the United States was much larger.”

The study notes increased political polarization as a factor in the U.S. ranking. The same thing is also observed in Brazil under new President Jair Bolsonaro, who has been called that nation’s version of President Donald Trump.

The analysis notes that the United States, which slid four spots from last year, has declined every year since 2016.

The report also cites improvements in Russia and Eurasia, as fighting in Ukraine has de-escalated. An estimated 13,000 people have died so far in the fighting there. Unrest in Central America increased, it says, especially in Venezuela and Nicaragua. 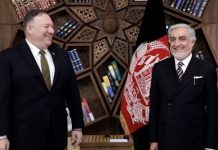 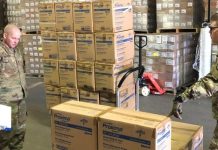