Aug. 5 (UPI) — Richard Trumka, the head of AFL-CIO, the largest and most powerful labor union in the United States, has died, the organization announced Thursday. He was 72.

The union didn’t provide details of Trumka’s death, but unnamed sources told Politico that it’s believed he died of a heart attack on Wednesday or Thursday.

“The labor movement, the AFL-CIO and the nation lost a legend today. Rich Trumka devoted his life to working people, from his early days as president of the United Mine Workers of America to his unparalleled leadership as the voice of America’s labor movement,” the AFL-CIO said in a statement.

“He was a relentless champion of workers’ rights, workplace safety, worker-centered trade, democracy and so much more. He was also a devoted father, grandfather, husband, brother, coach, colleague and friend. Rich was loved and beloved.”

Trumka was elected president of the powerful organization in 2009, which represents some 12.5 million workers, after first serving as its secretary-treasurer. He also was president of of the United Mine Workers of America for 13 years and a staff attorney for the union during the 1970s.

Trumka ousted UMWA President Sam Church Jr. for the post in late 1982 and served until 1995. At age 33, he was the union’s youngest president.

Biden on Thursday expressed regret over Trumka’s death during an event at the White House.

“He wasn’t just a great labor leader, he was a friend,” Biden said. “He was someone I could confide in, and you know whatever he said he would do he would do. … He was always there. He was an American worker, always fighting for working people, protecting their wages, their safety, their pensions, and their ability to build a middle-class life.”

“The working people of America have lost a fierce warrior at a time when we needed him most,” he said.

“Rich Trumka was the working people of America. I wanted to inform my colleagues that we have just lost a giant, and we need him so.”

Trumka is survived by his wife Barbara, whom he married in 1982, and the couple’s son. 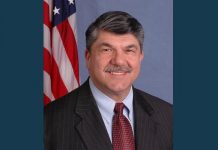 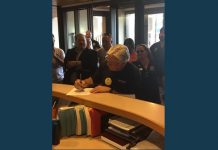