March 14 (UPI) — The U.S. Air Force announced the delivery of its newest gunship on Wednesday as the AC-130J Ghostrider was unveiled at Hurlburt Field, Fla.

The plane is an upgrade of the Block 20 AC-130J, with Block 30 improved software and avionics.

Its weapons include 30 mm Mk 44 Bushmaster II cannon which can act “almost like a sniper rifle. It’s that precise,” said former 1st Operations Wing commander Col. Tom Palenske in May.

The plane also carries 105 mm M102 onboard howitzers. Upgraded turboprop engines will propel the plane at one-third the cost per flying hour as the AC-130U planes.

“The technology in this 5th generation gunship will ensure our combat relevance in the skies above today’s battlefields and the battlefields of the future,” said Col. Michael Conley, 1st Special Operations Wing commander.

The first Block 30 plane will remain in testing status for one year, before it will deploy for battlefield operations, the Air Force said. 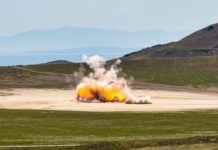