Nov. 3 (UPI) — Airbnb no longer will allow the rental of properties for house parties after five died in a shooting on Halloween in the San Franciso Bay Area.

On Saturday, CEO Brian Chesky announced on Twitter the immediate ban of “party houses” and will implement other procedures on preventing unauthorized use of rentals after the incident in Orinda, about 7 miles east of Oakland, on Thursday night.

“Starting today, we are banning ‘party houses’ and we are redoubling our efforts to combat unauthorized parties and get rid of abusive host and guest conduct, including conduct that leads to the terrible events we saw in Orinda,” Chesky tweeted.

Chesky said “we must do better, and we will. This is unacceptable.”

He further tweeted what steps will be taken by the San Francisco-based company: “First, we are expanding manual screening of high-risk reservations flagged by our risk detection technology. Second, we are creating a dedicated “party house” rapid response team. Third, we are taking immediate action against users who violate these enhanced guest policies, including removal.”

In addition, he said executive Margaret Richardson will oversee a new team “and initiate a 10 day sprint to review and accelerate the development and implementation of these new safety initiatives.”

The party was held at an Airbnb rental that specifically prohibited parties. But it was advertised on social media and had more than 100 people in attendance.

“Arriving officers found a highly chaotic scene that included gunshot victims, injured party-goers, and numerous people fleeing the scene. The partygoers apparently came from throughout the Bay Area for the Halloween event,” the Contra Costa County Sheriff’s Office said in a news release.

No suspects have been arrested in the shooting.

An undisclosed number of people were taken to local hospitals by ambulance and others transported themselves for medical care. Two people died at the hospital.

“Our whole neighborhood heard it, and then people were screaming and fleeing,” a neighbor, Chris Gade, the told San Francisco Chronicle. “We could see from our windows. There were a lot of people walking around who were hurt.”

The owner of the property, Michael Wang, 58, told the Chronicle that the party’s host said she was planning a family reunion for 12 people.

When he began receiving noise complaints from neighbors and noticed large crowds in his security camera, Wang called police.

“They were on the way to go there to stop them, but before we got there, the neighbor already sent us a message saying there was a shooting,” he said. “When we arrived there, the police were already there.”

In May, Airbnb rented out a three-story home in rural Palm City, Fla., for an after-prom house party to be attended by several hundred high school students.

The party was to include alcohol, drugs and stripper poles but the plans, including busing kids 60 miles, was halted by police acting on a tip from a school resource officer at the school, West Boca High, in Southern Florida. 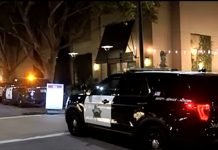 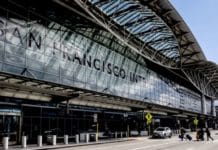