April 14 (UPI) — American Airlines announced Sunday that it will extend its cancellations of Boeing 737 Max 8 aircraft through the summer months.

The airline’s CEO Doug Parker and President Robert Isom issued a statement saying it would cancel 115 flights daily through Aug. 19, representing approximately 1.5 of the airlines’ flying each day during the summer.

“Based upon our ongoing work with the Federal Aviation Administration and Boeing, we are highly confident that the MAX will be recertified prior to this time,” the statement said. “But by extending our cancellations through the summer, we can plan more reliably for peak travel season and provide confidence to our customers and team members when it comes to their travel plans.”

American, which owns 24 of the planes, said last week that it would cancel flights through early June due to Boeing 737 Max 8 jets being grounded after two of the aircraft from Lion Air and Ethiopian Airlines crashed, killing 189 people and 157 people respectively.

Not all flights previously scheduled on a Max will be canceled, and other other aircraft maybe substituted, the airline said.

On Thursday, Southwest airlines announced the decision to extend its cancellation of Boeing 737 Max aircraft through Aug. 5. The airline has grounded 34 of the jets.

American operates an average of 85 flights per day on the Max 8 out of 6,700 departures throughout its system.

The airline said it will bring the Max aircraft back on line as spares to supplement its operations once it is receritfied.

“We remain confident that the impending software updates, along with the new training elements Boeing is developing for the Max, will lead to recertification of the aircraft soon,” American said. “We have been in continuous contact with the FAA, Department of Transportation, National Transportation Safety Board, other regulatory authorities and are pleased with the progress so far.” 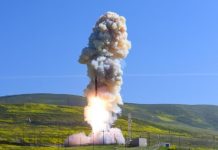