The company said retail stores, wholesales and U.S. manufacturing operations will continue to run and international stores are also unaffected by the move.

American Apparel called the bankruptcy part of a “strategy to revitalize our brand.”

More than $200 million in company bonds will be exchanged for equity interests in the company following its restructuring process, which it aims to complete within six months. The bond exchanges and other measures will reduce the company’s debt from $300 million to a ceiling of $135 million, in addition to lowering annual interest costs by $20 million.

The move follows statements made by the company in August that it was doubtful whether it would stay in business. The company had engaged in a revitalization effort that included shuttering stores and laying off employees as well as addressing lawsuits from former CEO Dov Charney.

Charney was fired from the company twice in 2014 following alleged company mismanagement and sexual harrassment. In return, Charney has hit the company with nearly 20 lawsuits. 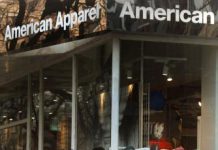