WASHINGTON — President Donald Trump’s plan for a show of military might and speech at the Lincoln Memorial on Independence Day is similar to military parades in countries like India and France, but actually could be viewed more as a tactic to remind Americans that the United States remains the superpower of the world despite China’s growing prominence, a defense expert said Wednesday.

The ceremony will feature M1 Abrams tank, Bradley fighting vehicle and other vehicles on static display. A march by ceremonial troops and flyovers of the Blue Angels, F-35 stealth jets and Air Force One jumbo jet are also expected.

Countries like India, France and Singapore have showcased their military hardware on days of national importance. A defense researcher said that the military is a vital element of any state, and such parades display a country’s power and legitimacy to adversaries, friends, and citizens of the country.

“We should not deny military power as long as we live in nation states,” said S. Kalyanaraman, a research fellow at the Institute of Defence Studies and Analyses in New Delhi, India. “You have to make your people confident that you are being taken care off.”

Although the U.S. outspends the next five countries combined on defense, Kalyanaraman said displaying U.S. capability plays into Trump’s agenda to project confidence about America’s leadership. He said the display could be a tactic to allay any concerns about China’s growing military and Russian aggression in Ukraine and elsewhere.

“Trump is a showman, he likes displays of power and wealth,” Kalyanaraman said. “If people within [America] are beginning to question its leadership, it might serve the purpose of self-worth.”

After seeing a military parade on Bastille Day in France in 2017, Trump announced his plans to top that by hosting “one of the greatest parades I’ve ever seen.” However, the parade was scuttled after the projected cost of $92 million became public.

Thursday’s military display, part of Trump’s “Salute to America” on the National Mall, is expected to cost millions. While officials remain tight lipped about the exact cost, it has been reported that the National Park Service was directed to divert nearly $2.5 million in funding to the event. India spent about $45 million for a four-hour parade in 2014, according to the country’s Central Public Works Department.

Kalyanaraman said that military parades that recognize the role of service members boost the morale of armed forces. “Compared to the benefits we derive, the cost of doing a parade is nothing.”

Code Pink, an anti-war group that will display a huge baby Trump balloon near the Lincoln Memorial, condemned Trump’s decision to give a speech and have a military display on a holiday more associated with hot dogs, fireworks and outdoor concerts.

“The U.S. is a militaristic country and is involved in a lot of wars. Countries like France and India aren’t,” said Medea Benjamin, co-director at Code Pink. “Part of his decision is to make people feel even better about the military when we need to be cutting back.” 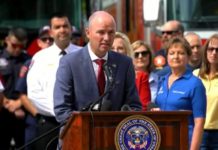