BEIJING, Nov. 10 (UPI) — Pollution in a northeastern Chinese city has become so lethal, even state media is criticizing the local government for policy failures.

“Some people have raised questions: In the face of this gross smog and pollution, why was the government’s emergency response plan ‘obstructed?'” state news agency Xinhua wrote. The city of Shenyang had failed to apply emergency measures that could have reduced smog, and didn’t provide advisories to residents to stay indoors, The New York Times reported.

The critical remarks come after activists said the city could have the “worst ever” air quality in the country. The BBC reported on Sunday pollution readings in Shenyang were 50 times higher than levels considered safe by the World Health Organization.

The Times reported the city’s residents were braving the elements and going about their daily business by bicycle or on foot, but that others were falling ill and visiting crowded respiratory sections at local hospitals. Some were taking greater precautions, including wearing heavy masks.

Angry commenters took to the Internet, verbally attacking the Shenyang Bureau of Environmental Protection for their shortcomings.

“What have you been doing about it? You just send out a microblog and that’s it? Wait for the wind to blow it away?” said one user, on a newly established site.

“When the smog is off the charts, you, the environmental authorities, can only tell residents to protect themselves,” stated another. “Incompetent, shameless, useless.”

Other locals protested the pollution, caused by the city’s coal-powered heating system coming online for the winter, through social media, using a hashtag.

“I can’t go on living like this, #Shenyang Haze#, if this goes on any longer everyone will probably get cancer,” said one person using the name BLS-Christine on Tuesday. 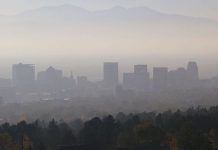 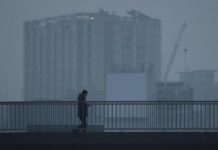