May 23 (UPI) — The U.S. Army Old Guard placed American flags on more than 228,000 graves at Arlington National Cemetery on Thursday as part of the annual “Flags In” tradition ahead of Memorial Day.

Some 1,000 members of the 3rd U.S. Infantry Regiment began placing the flags at each grave site and at the bottom of some 7,000 niche rows at the cemetery’s Columbarium Courts and Niche Wall.

Additionally, Army chaplains placed flags in front of four memorials and grave sites on Chaplain’s Hill, and tomb sentinels placed flags at the Tomb of the Unknown Soldier.

President Donald Trump and first lady Melania Trump made an unannounced visit to the cemetery to participate in “Flags In.”

The annual tradition takes about 4 hours to complete and the flags will be removed after Memorial Day.

The “Flags In” tradition began in 1948 with the creation of the Old Guard ceremonial unit. 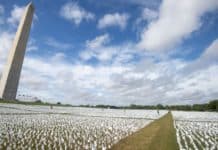