As a Type 1 center, the site at California State University Los Angeles can to offer up to 6,000 vaccinations per day.

The Federal Emergency Management Agency has requested up to 50 more Type 1 teams, as well as 50 Type 2 teams with 139 personnel capable of 3,000 vaccinations per day, Gen. Glen D. VanHerck of the U.S. Northern Command said in a Defense Department statement.

“The target goal for this site was Feb. 16, and that was delivered on. The site is ramping up quickly. It’ll get towards 6,000 vaccinations per day,” VanHerck said.

The soldiers are deployed from Fort Carson, Colo, as well as Army North’s Joint Task Force 46. The task force is also managing 355 military medical personnel of the Army, Navy and Air Force who provide ongoing medical support to 14 hospitals in 13 cities within California, Arizona, Texas, and the Navajo Nation.

The White House announced plans to involve up to 1,000 U.S. troops in civilian vaccinations on Feb. 5. 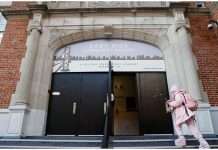