June 24 (UPI) — Investigators believe “foul play” is involved in the disappearance of a second U.S. soldier to go missing from the Fort Hood, Texas, military base in the last year, a local politician said.

Rep. Sylvia Garcia told reporters outside the base on Tuesday that she met with investigators searching for Pfc. Vanessa Guillen, who went missing in mid-April, and they told her “foul play is involved.”

Garcia said the investigators weren’t able to reveal why they believe Guillen’s disappearance is suspect, but they were as “forthcoming” as possible given that it is an ongoing criminal investigation.

“They have now used the words ‘foul play,'” she said, adding the investigators were following up on all leads.

The U.S. Army confirmed foul play in a statement to ABC 13.

“At this point, and after the results of investigative information that has been developed in the last few days, we suspect foul play in the disappearance of Pfc. Vanessa Guillen,” the statement read.

Guillen, 20, was last seen between 11:30 a.m. and 12:30 p.m. on April 22 in the parking lot of her Regimental Engineer Squadron Headquarters at Fort Hood, Army officials said.

“Her car keys, barracks room key, identification card and wallet were later found in the armory room where she was working earlier in the day,” Ford Hood said in a statement. “She was last seen in the parking lot wearing a black t-shirt and purple fitness-type pants.”

Troopers with the 3rd Cavalry Regiment last week searched training areas for Guillen after having searched barracks, fields, lakes and trails throughout the city of Fort Hood, the base said in a statement.

“Our number one mission is to find Pfc. Vanessa Guillen,” said 3rd Calvary Regiment Commander Col. Ralph Overland. “I’m laser-focused on that. We are working with [U.S. Army Criminal Investigation Division] and law enforcement and we will not stop.”

The admission came days after Army officials announced on Sunday that foul play was involved in the disappearance of Pvt. Gregory Wedel-Morales, who was last seen Aug. 19 driving a black Kia Rio near Fort Hood where he was stationed. His last known contact occurred the next day.

Wedel-Morales’ remains were found on Friday in a field in the central Texas city.

The Army has said that investigators have no credible information the two cases are related.

The League of United Latin American Citizens, the nation’s oldest Latino civil rights group, demanded Tuesday for the military, Congress and the White House to get involved in Guillen’s disappearance, accusing the investigators of “reckless mishandling” of the case.

“Her life exemplifies the very finest and we will not allow this crime to be treated lightly, disrespectfully and with callous indifference!” LULAC President Domingo Garcia said in a statement.

The organization said it has issued a “predator alert” warning families against allowing their daughters to enlist in the Army “since we see they cannot be protected.”

A reward of $25,000 has been offered for information that leads to either Guillen’s whereabouts or concerning Wedel-Morales’ death. 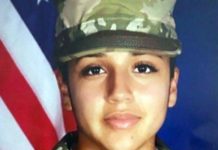 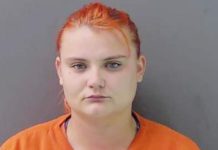 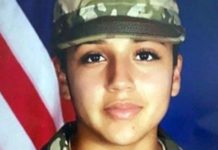