HOPE, Ark., Dec. 25 (UPI) — Authorities are investigating a fire that damaged the childhood home of former President Bill Clinton on Friday, and they say indications are it was deliberately set.

The blaze broke out at about 3:20 a.m. Friday at the two-story home, called the William J. Clinton Birthplace, in Hope, Ark., officials said. The historic dwelling, which has National Historic Site status, closed on Thursday and was supposed to reopen Saturday.

Investigators said that so far it appears the blaze was set by an arsonist.

“There’s just evidence and signs that we do believe it was intentionally set. It will be investigated and handled as a potential arson fire,” Hope Fire Chief Dale Glanton told KSLA-TV.

Fire officials said the home sustained severe damage to its exterior, as well as smoke and water damage.

One indicator that suggests arson, officials said, is graffiti on a sidewalk leading up to the house and more graffiti on one of the doors.

“This is a very important structure and house inside the city of Hope,” Police Chief J.R. Wilson said. “It’s got a lot of historical value to it and stuff here. And, like I said, it’s a really historical piece of property in Hope.

“We really want to protect it and do the best job that we can do.”

There was also a strong smell of an accelerant, Wilson added.

Clinton lived in the home with his mother and grandparents until he was 4 years old. It was classified a presidential site in 2009 and a presidential historic site two years later. It is operated by the National Park Service. 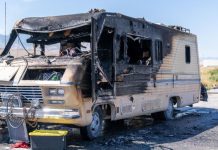