June 25 (UPI) — At least one person was killed and as many as 99 were missing Thursday after about half of the units in a high-rise oceanfront condominium building near Miami Beach collapsed overnight.

“This is a tragedy without precedent in the United States of America,” Rep. Debbie Wasserman Schultz, D-Fla., said during an evening press conference from the scene. “The devastation that I witnessed today is the likes I’ve never seen.”

Officials said a portion of the Champlain Towers building in Surfside, Fla., collapsed after 1 a.m. On Thursday afternoon, flames and smoke broke out at the site, WPTV-TV reported.

According to authorities, a woman was killed and at least 10 others were hurt. Officials said two people, including a young boy, were pulled from the debris and hospitalized. Thirty-five people were evacuated from the building, they added.

Miami-Dade County Mayor Danielle Levine Cava told reporters in the evening press conference that 99 people were still missing, some of whom may not have been in the building, while authorities have been able to confirm as safe 102 people.

“The rest of the search and rescue efforts has been done by manpower on the outside, search on the barrier quarters, also with drones and with dogs,” Miami-Dade Commissioner Sally Heyman told CNN. “It has shifted now or started to shift to recovery.” 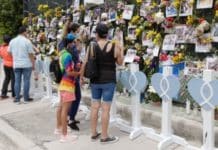 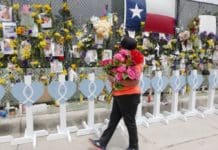