Proof that binary star systems can host multiple planets is significant because binary stars are much more common than solo stars like the sun.

The new discovery was published this week in the Astronomical Journal.

Scientists previously observed the transits of two planets circling the stellar duo in Kepler-47, but the third planet’s transit signal was weak, making it hard to spot.

When researchers surveyed new data collected by NASA’s Kepler space telescope, they were able to isolate the dimming caused by the third exoplanet’s orbital path across the face of the binary stars.

“We saw a hint of a third planet back in 2012, but with only one transit we needed more data to be sure,” lead study author Jerome Orosz, an astronomer at San Diego State University, said in a news release. “With an additional transit, the planet’s orbital period could be determined, and we were then able to uncover more transits that were hidden in the noise in the earlier data.”

Astronomers estimate that the orbital plane of the newly discovered third planet, Kepler-47d, became more aligned with Earth and its two suns, increasing the strength of its transit signal.

Surprisingly, the new transit data suggests the third exoplanet, which orbits the two suns in between the other two exoplanets, is the largest of the three — roughly between the sizes of Neptune and Saturn. 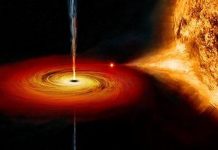 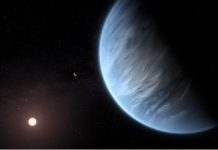 Water detected on planet in ‘habitable zone’ — a first