DALLAS, Nov. 28 (UPI) — At least three people died and a fourth person was missing in North Texas flooding as rain continued to fall throughout the central United States on Saturday.

A slow-moving weather system dumped more than five inches of rain beginning Thursday on parts of already-soaked Texas. Flash flood alerts are in effect for North Texas until Sunday morning as temperatures are expected to dip.

More than 50,000 homes were without power early Saturday after an ice storm in Oklahoma City. In Kansas, slick conditions led to hundreds of car crashes,authorities said.

“Significant accumulations of ice and snow will bring dangerous travel conditions and potential power outages to portions of New Mexico, Texas, Oklahoma and Kansas,” the National Weather Service said. “Further east, heavy rain could cause river and flash flooding across the southern plains.”

In Johnson County, Texas, located in the Dallas-Fort Worth area, rescue workers said flooding has swamped roads, leading to at least three deaths.

Benjamin Taylor Floyd, 29, was found dead in a submerged car early Friday after he apparently tried to drive through high water. Sandra Jones, 33, was found dead in her car after it was swept off the road by flood waters. Jose Vargas, 48, was found after Johnson County Sheriff’s deputies tried to rescue him with two other people who were in a pickup. The two others in the truck survived.

In Dallas, rescue workers handled some 27 water rescues and more than 80 traffic crashes. A 13-month-old girl and a 12-year-old boy died after a speeding SUV slammed into a car carrying a family of five. The driver of the SUV was being held at the Dallas County Jail. Alcohol and slick road conditions may have played a part in the crash, authorities said.

The National Weather Service said 2015 has become the wettest year on record in North Texas, with more than 56 inches of rain. The previous record, 53.5 inches, was set in 1991. 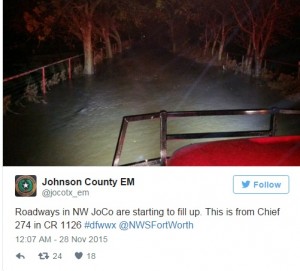