Dec. 2 (UPI) — At least seven people were reported dead in weather-related incidents throughout the United States on Monday amid a post-Thanksgiving winter storm.

Three people drowned in floodwaters in Missouri after their cars were swept off roads and a passenger was killed in a rollover in South Dakota.

Three children died in Arizona after a family truck was swept away while crossing a creek. Two bodies have been recovered and crews are still searching for a 6-year-old girl Willa Rawlings.

The storm entered the region Sunday and more than a foot of snow had already fallen in Albany, N.Y., by early Monday. Nearly 21 inches were recorded in East Glenville, about 25 miles northwest of the New York capital.

FlightAware reported more than 5,600 delayed U.S. flights and 1,642 cancellations by 6:48 p.m. EST Monday. Nearly 1,000 flights nationwide were canceled on Sunday and thousands were delayed as many Thanksgiving travelers made their return home.

As the East Coast’s first major winter storm strengthens and moves slowly off the northeastern coast, the National Weather Service issued warnings and advisories from northern Maine to as far south as Bristol, Tenn. — including for major cities like Boston, New York and Philadelphia.

Between 10 and 20 inches of snow were expected to fall in the affected areas.

The strengthening storm prompted New Jersey Gov. Phil Murphy to close all government offices for nonessential employees at noon Monday. Two of the state’s major toll highways saw their speed limits reduced as the storm began with a wintry mix of snow and sleet.

Boston Public Schools announced all of its schools would be closed on Tuesday due to the storm.

Forecasters said the storm could reorganize late Monday and deliver a second round of heavy snow lasting into Tuesday morning, with some predicting that eastern and coastal Massachusetts will bear the brunt of a later wave of precipitation.

After beginning off the West Coast last week, the potent system worked its way across the northern tier of the country. It pounded the Upper Midwest during the weekend, resulting in an historic snowfall of 22 inches in Duluth, Minn. 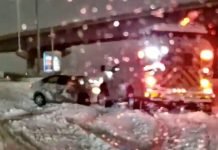 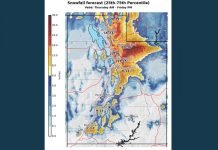