Feb. 24 (UPI) — The operator of a Boeing 767 cargo jet that crashed near Houston confirmed Sunday that all three people on board died.

Atlas Air Worldwide issued a statement announcing the three people on board Atlas Air Flight 3591 did not survive after the plane crashed in Anahuac, Texas, on Saturday.

“Our thoughts and prayers are with all those who have been affected,” Atlas Air Chief Executive Officer Bill Flynn said. “This is a sad time for all of us. Our team continues to work closely with the NTSB, the FAA and local authorities on the ground in Houston. We would like to commend the efforts of all of the first responders. We sincerely appreciate their efforts and support in the investigation.”

During a press conference on Sunday, Chambers County Sheriff Brian Hawthorne said two bodies had been recovered from the scene of the crash.

NTSB Chairman Robert Sumwalt said the agency had received video of the crash from the Chambers County Jail, located about a mile from the site of the crash.

Sumwalt said the plane was in the video for about 5 seconds, descending at a deep altitude.

He added no distress call was made prior to the crash.

Sumwalt added it was critical that the plane’s black box flight recorders be located and that the NTSB would continue its investigation until the perishable evidence is recovered.

“That could take days, weeks or even longer. We have to get those recorders. We will be here as long as it takes to get that,” he said.

The plane crashed at about 12:45 p.m. about 30 miles southeast of Houston George Bush Intercontinental Airport while traveling from Miami to Houston while operating for Amazon Prime Air.

It nosedived into the water near Trinity Bay, where Hawthorne said strong winds had made recovery efforts more difficult by blowing water out of the bay, making it more difficult to send certain boats to the area.

“This is definitely not an easy task,” he said of the recovery effort. 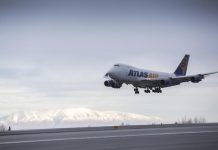