The department announced Wednesday the disease was probable in an adult resident in the northern part of the county in Austin, Texas, and there have also been five positive mosquito pools this year.

West Nile Virus is the most common mosquito-borne disease in the United States and is usually spread by mosquito bites, Austin Public Health’s statement said.

It’s estimated that about 1 in 5 people infected develop symptoms such as fever with mild, flu-like symptoms, headache and body aches, the statement said. Occasionally, people also have a skin rash and swollen lymph glands. Persons over age 50 are at higher risk for severe disease from being infected and some of their symptoms may including stiffness, paralysis, disorientation, vision loss and tremors.

“The first probable human case of West Nile Virus serves as a reminder to take precautions to prevent breeding of mosquitoes, which can then bite and infect people in our community,” Austin Public Health Chief Epidemiologist Janet Pichette said in a statement. “Like many other diseases, we have the power to prevent West Nile virus by draining standing water, limiting time spent outdoors, and wearing appropriate clothing and DEET when outdoors.”

Last week the Texas Department of State Health Services announced the first Texas case in a human of West Nile virus this year. An adult resident of Tarrant County who became infected later died. The Dallas Morning News reported the victim was a Fort Worth resident. Exact age or gender wasn’t revealed, though health officials said the person was a “senior adult” with underlying conditions. 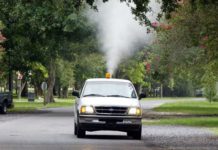 Warming climate to shift threat of West Nile virus in the U.S.