The house, near the German border, was leased by the government from a private owner until 2011, when the owner refused permission for renovations. It had been used as a center for people with disabilities, but now stands empty. Talks between the owner and the government, over new uses for the rented property, stalled and the owner has refused to sell the building.

Seizing the house is “the worst and the last choice, but there are circumstances in which it becomes necessary,” said Harry Buchmayr, the area’s representative in parliament.

It also comes with the reminder that Austria has an obligation, declared in its constitution, to prevent any re-occurrence of Nazism, and confiscating the house means the Austrian government, fearing it could become a magnet for neo-Nazi groups, must decide what to do with the property.

There have been several proposals for the home. Some of Braunau am Inn’s 17,000 residents support using it as a refugee center. Other proposals are for an Austrian liberation museum, a maternity hospital or a meeting place for scholars. Some residents, however, want to see the home demolished.

Gerhard Baumgartner of the Documentation Center of Austrian Resistance, a clearinghouse of far-right and fascist activity information, suggested it become a fire house or supermarket.

He told the Vienna-based newspaper Die Presse, “You must completely depoliticize the place. You must put up something that no one wants to be photographed in front of. I don’t think you have to tear down the old house,” The Local reported Tuesday. 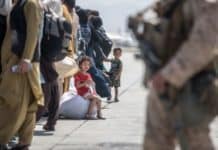