BATON ROUGE, La., Feb. 13 (UPI) — Two Baton Rouge police officers were taken to a local hospital to be treated for gunshot wounds after a shootout on Saturday morning.

District Attorney Hillar C. Moore III said the officers are “lucky to be alive” after they were shot at by a suspect following a two-mile car chase while responding to a call about damage to property at 6 a.m.

The shooter, who has not been identified, retrieved a large caliber semi-automatic assault rifle from his sister’s home and opened fire on police, authorities said.

One bullet grazed an officer in the head and the other struck the side of an officer who was protected by a bulletproof vest, police said.

“One more inch and an officer is dead,” Moore told WAFB of the shooting.

The officers were taken to a local hospital and are in stable condition, Chief of Police Carl Dabadie Jr. said.

Baton Rouge police spokesman Lt. Jonny Dunnam said the shooter was in critical condition after surgery. The shooter is currently on probation for a charge of cruelty to a juvenile that occurred in 2014, Moore said. 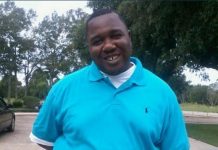 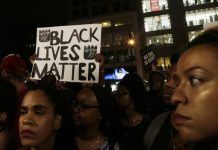 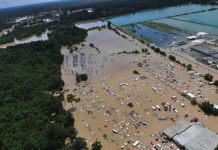