March 16 (UPI) — Six members of a BBC team of journalists were among the injured Thursday after Mount Etna, a volcano in Sicily, began to erupt, sending boiling hot rocks flying into the air.

BBC global science correspondent Rebecca Morelle said on Twitter after the incident that six BBC team members suffered non-life threatening injuries and several were taken to area hospitals for treatment. Among those near the summit of Mount Etna when it began to erupt was a 76-year-old woman who was able to rush to safety.

The primary problem was that the lava hit snow that had fallen along the mountaintop, causing explosions because of the massive temperature difference. Boiling hot rocks were sent flying into the air, raining down on the journalists and others who happened to be near the top of the mountain.

Morelle lauded the travel guides who had taken them up the mountain, saying they were to thank for helping the group escape serious harm.

Etna is one of two volcanoes in Italy considered “decade volcanoes” because of how frequently they can erupt. Its last major eruption was in 1992.

“Running down a mountain pelted by rocks, dodging burning boulders and boiling steam – not an experience I ever ever want to repeat,” Morelle said on Twitter after the group got off the mountain. “Reminder of how dangerous & unpredictable volcanoes can be – everyone had a very lucky escape.” 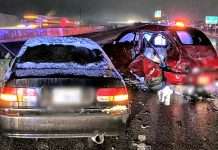