WASHINGTON, Dec. 4 (UPI) — After giving an impassioned speech on the Senate floor earlier this week rebuking a plan to de-fund Planned Parenthood, Sen. Bernie Sanders, I-Vt., missed the vote on the bill that would do just that.

The Senate voted 52-47 on Thursday to essentially gut the Affordable Care Act and remove federal funding from Planned Parenthood. That’s 99 of 100 possible votes. The only one missing was Sanders.

Sanders’ spokesperson Michael Briggs told Forbes on Friday that Sanders had a plane to catch for New Hampshire at the time of the vote. Briggs added that while Sanders is still a strong supporter of Planned Parenthood, “the outcome of the vote was not changed” due to Sanders’ absence.

Sanders returned to the chamber 12 hours after hernia surgery on Tuesday to scold Senate Republicans for rallying behind the bill, calling it a “waste of time.”

Sanders called for Republicans to end their “witch hunt” against Planned Parenthood.

The legislation still needs approval from the House before it lands on President Barack Obama’s desk. Obama has promised to veto it. 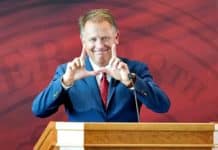