July 5 (UPI) — President Joe Biden, before the largest congregation of his presidency, hosted a July 4th event at the White House to celebrate the nation’s achievements in its fight against the coronavirus pandemic while commemorating the lives they lost to it.

Some 1,000 essential workers and military families were hosted by the president and first lady Jill Biden on the South Lawn of the White House on Sunday for a barbecue to celebrate the holiday weekend.

He asked those there to look back on where they were a year ago and to think on how far the nation has come — from silent streets to crowded parade routes, from families separated to joyous reunions.

“This year, the Fourth of July is a day of special celebration, for we are emerging from the darkness of years — a year of pandemic and isolation. A year of pain, fear and heartbreaking loss,” he said.

He contrasted the nation’s purging of jobs and a smoldering economy under the weight of the pandemic last year to the recent growth both have experienced recently that he said “was the best in four decades.”

“Today, all across this nation, we can say with confidence, America is coming back together,” he said.

He continued comparing the United States’ fight for independence to its fight against COVID-19, stating that while the country’s Declaration of Independence of 1776 was a call to action and not a claim of victory or a reason for complacency, the same is true today.

He urged Americans who have yet to be vaccinated to do so as their patriotic duty, as more powerful variants of the virus have emerged.

The White House’s vaccination drive has been a key policy of the Biden administration, with the president having declared on taking office that within 100 days 100 million Americans would be inoculated with the vaccine — a number he increased twice before the deadline, and which was met.

However, the nation failed to meet the goal to have 70% of eligible adults nationwide vaccinated with at least one dose by the July 4th holiday with only 18 states having hit that number.

The vaccine, he said, has given the United States the upper hand against the virus, but they haven’t vanquished it with the best defense they have being Americans inoculated against COVID-19.

“My fellow Americans, it’s the most patriotic thing you can do,” he said. “So please, if you haven’t gotten vaccinated do it, do it now. For yourself, for your loved ones, for your community and for your country.”

The United States never wants to be where it was a year ago, he said, and then pulled his daily schedule card from his inside jacket pocket.

Every day he has the precise number of how many Americans have died to the pandemic printed on its back, he said, stating that night it read 603,018.

He added that others have died from other causes, and their families and friends due to COVID-19 restrictions were denied the ability to grieve.

“Each of them meant the world to someone they left behind. And those who have been through all this know that to heal, you have to remember,” he said. “And we will. We commit to always remember them.”

He said the American people in their fight have been part of “one of the most remarkable achievements” in U.S. history.

He also championed the nation’s unity in the face of the challenge, stating that unity of purpose has brought them from where they were a year ago to standing together celebrating Independence Day on the South Lawn.

“Over the past year, we’ve lived through some of our darkest days,” he said. “Now I truly believe — I give my word as a Biden — I truly believe we’re about to see our brightest future.” 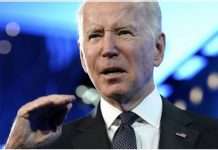