March 19 (UPI) — President Joe Biden and Vice President Kamala Harris both traveled to Atlanta on Friday, where they’d originally planned to promote the American Rescue Plan but will now offer strength and support for a city that saw eight of its people shot dead by a gunman a few days ago.

During their visit, Biden and Harris met with grief-stricken members of the Atlanta and Asian American communities rattled by Tuesday’s shooting at three area spas.

The president and vice president left Washington, D.C., for Atlanta late Friday morning. According to their schedule, they met with community leaders at Emory University at 3:30 p.m. EDT to discuss “ongoing attacks and threats” against Asian Americans related to the COVID-19 pandemic.

Biden made public remarks at the university.

“This speaks to a larger issue, which is the issue of violence in our country and what we must do to never tolerate it and to always speak out against it,” Harris said in a report by the Atlanta Journal-Constitution.

Local and federal investigators were looking into the motivations of gunman Robert Aaron Long, who told police he visited three Atlanta-area spas on Tuesday and shot nine people. Eight died, six of whom were of Asian descent.

Police have said Long denies the attacks were racially motivated, but federal authorities were looking into the shootings as possible hate crimes.

Over the past year, attacks against Asian Americans have risen dramatically — officials and experts say as some sort of misguided payback for the coronavirus crisis, which was first identified in Wuhan, China, a year ago. 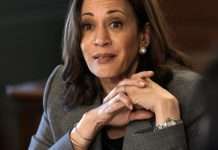