March 12 (UPI) — Former Vice President Joe Biden appeared to hint at a potential run from for president Tuesday morning speaking before a raucous crowd in Washington, D.C., at the International Association of Fire Fighters union conference.

As the crowd held up placards and chanted “Run, Joe, run,” Biden quipped, “Save [that energy] a little longer. I may need it in a few weeks. … Be careful what you wish for.”

Biden played up his blue-collar public image, criticizing President Donald Trump’s current budget proposal that would slash $845 billion out of Medicare and touting labor unions for building the middle class.

“[The convention audience] looks like my old neighborhood — we’re ready to take anybody on,” Biden said. “You grew up either to be a firefighter or a cop, a tradesman or a priest. And I wasn’t qualified to be any of them.”

Jokes aside, Biden tried to show that if he ran, he would be the Democrats’ best shot at challenging Trump, talking directly about the current administration’s policies and its effect on the public.

“In America, everybody gets a shot,” Biden said. “That’s what the next President of the United States needs to understand and that’s what I don’t think this current president understands at all. 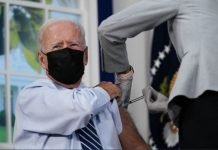