Special forces units were involved in the raid in the village of Atmeh near Syria’s border with Turkey. A U.S. military helicopter was also destroyed on the ground during the raid, officials said.

“Last night at my direction, U.S. military forces in northwest Syria successfully undertook a counter-terrorism operation to protect the American people and our allies, and make the world a safer place,” Biden said in a statement.

“Thanks to the skill and bravery of our Armed Forces, we have taken off the battlefield Abu Ibrahim al-Hashimi al-Qurayshi — the leader of ISIS. All Americans have returned safely from the operation.”

Al-Qurayshi became the second ISIS leader in October 2019. He ascended to the top spot after the first leader, Abu Bakr al-Baghdadi, detonated a suicide vest during a different U.S. raid in Syria.

“The mission was successful,” he said. “There were no U.S. casualties.”

The helicopter raid was similar to the one in 2019 that killed al-Baghdadi. U.S. forces used loudspeakers ordering everyone inside a target home to surrender and leave. When no one did, the assault on the home began.

Syrian Civil Defense, also known as the White Helmets, said at least 13 people, including six children and four women, died during the raid which followed an airborne operation by U.S. forces early Thursday.

The White Helmets said the operations focused on the Atmeh house and that it transported some of the wounded and retrieved the bodies.

The U.S. military has used drones in the past to target al-Qaida leaders in Idlib, which had been the militant group’s Syria base at one time. The Pentagon said the terrorists were using Syria to launch attacks into Iraq and other locations. 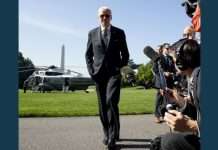