June 17 (UPI) — President Joe Biden on Thursday signed a law formally making Juneteenth a federal holiday, saying that doing so was “one of the greatest honors” of his presidency.

He signed the Juneteenth National Independence Day Act during a ceremony in the White House’s East Room, accompanied by Vice President Kamala Harris lawmakers who supported the bill.

The law recognizes June 19, the official date of the end of slavery, as a federal-level holiday.

“Great nations don’t ignore painful moments,” Biden said. “They don’t ignore those moments in the past. They embrace them.

“I have to say to you, I’ve only been president for several months, but I think this will go down, for me, as one of the greatest honors I will have as president.”

The new holiday will cost the government about $600 million each year in paid time off for federal employees.

The bill was passed unanimously in the Senate on Tuesday and 415-14 in the House Wednesday.

The U.S. Office of Personnel Management said Thursday that since June 19 falls on a Saturday this year, federal workers will have Friday off.

June 19 is the day the last parts of the confederacy were freed from slavery in Galveston, Texas, in 1865.

Texas made Juneteenth a state holiday in 1980 and a proposal to make it a federal holiday was first introduced the Senate in 1996. It’s also known as Freedom Day, Jubilee Day and Liberation Day.

Juneteenth is now the 12th federal holiday and the first since Martin Luther King Jr. Day in 1983. 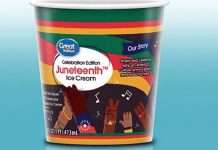