Jan. 14 (UPI) — A day after his predecessor was impeached for the second time in a little more than a year, President-elect Joe Biden on Thursday will unveil plans for streamlining COVID-19 vaccinations nationwide and a new stimulus package — which could include another direct payment to Americans.

Biden will detail the plans during a speech from Wilmington, Del., on Thursday evening. He is expected to speak at around 7 p.m. EST.

The transition team said the economic proposal would include money for vaccinations and quick relief for struggling families and communities.

Biden, who will take office next Wednesday, is expected to call on Democrats and Republicans in Congress to immediately take action on his proposals.

Most Americans began receiving a second direct payment of $600 last month after a compromise package was passed in Congress. Proposals then to raise the amount to $2,000 had bipartisan support in Congress but was blocked by Senate Republican leader Mitch McConnell.

With Democrats soon taking control of the Senate, Biden’s plan for a third payment is expected to have a much better chance to pass. The Democratic-controlled House approved the increase before McConnell’s block.

Biden’s economic proposals, however, require 60 votes in the Senate for passage, meaning there still needs to be some GOP support. Some key Republicans in the chamber, including Sens. Lindsey Graham of South Carolina and Marco Rubio of Florida, had supported $2,000 payments last month.

Biden’s plans are also expected to address other key issues, including healthcare, education and climate change.

It remains to be seen exactly what kind of GOP support Biden will see when he takes office after House Democrats and 10 Republicans voted to impeach President Donald Trump on Wednesday for inciting an “insurrection” at the U.S. Capitol last week.

“[The nation] remains in the grip of a deadly virus and a reeling economy,” Biden said after the vote Wednesday.

“I hope that the Senate leadership will find a way to deal with their constitutional responsibilities on impeachment while also working on the other urgent business of this nation.”

Most Republicans in the House, 197, voted against impeachment. Several GOP senators have so far expressed willingness to convict Trump when the upper chamber holds its trial. When that will occur, however, is unknown.

The Senate is required to hold a trial when it receives the article of impeachment from House Speaker Nancy Pelosi. The chamber won’t reconvene until Tuesday and McConnell has ruled out returning earlier.

Pelosi didn’t say Wednesday when the article would be transmitted to the Senate. If the Senate ultimately convicts Trump, it could also bar him from ever holding federal office again. 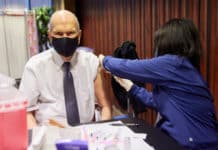