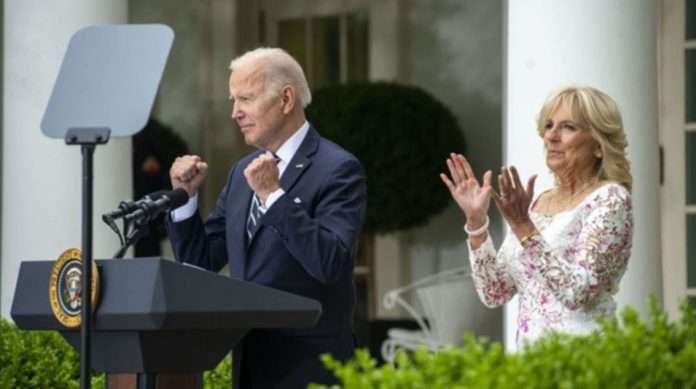 May 6 (UPI) — President Joe Biden called for Congress to pass immigration reform as he and first lady Jill Biden hosted the Mexican first lady during a celebration of Cinco de Mayo on Thursday.

The Bidens hosted Beatriz Gutiérrez Mueller de López Obrador, wife of Mexican President Andres Manuel López Obrador during a ceremony at the Rose Garden of the White House as the president called for lawmakers to act on legislation that would create a path to citizenship for about 11 million undocumented immigrants.

“We are an immigrant nation. We say that, but people act like they don’t believe it,” Joe Biden said. “That is our strength.”

President Biden said that if lawmakers cannot pass the legislation, which has stalled since he sent it to Congress his first week in office, then they should turn their focus toward bills protecting recipients of Deferred Action for Childhood Arrivals protections, known as DREAMers, and Temporary Protected Status for farm workers, essential workers and others.

The president recalled that President López Obrador remarked to him about a portrait of President Franklin Delano Roosevelt hanging in the White House and noted that he liked Roosevelt because he initiated the Good Neighbor policy between the two nations.

“I told him that today the United States and Mexico are more than good neighbors; we’re genuine, true friends, partners,” Joe Biden said. “And there’s an unshakable bond strengthened by mutual respect and our shared commitment to the prosperity of both our nations. It’s not our backyard; it’s our front yard.”

First lady Jill Biden noted that Cinco de Mayo celebrates the Mexican military’s victory over the French army in the Battle of Puebla on May 5, 1862.

“It showed the determination and the backbone of the Mexican people,” she said. “It inspired other cities to believe that they, too, could stand against the odds.”

The first lady noted that “reverberations of the battle” traveled north to the United States, as the holiday has been celebrated by Mexican Americans in California standing against white supremacy since the 1860s and slowly spread across the country.

“This holiday reminds us that the threads of our history and our heritage are woven together. We inspire one another. We shape each other,” she said.

Because of the commercialization, Cinco de Mayo today is mostly marked by Mexican-themed music and festivals. The day is often recognized with food and drink specials and parties, from restaurants and bars, from Taco Bell to McDonald’s.

Shipment of 78,000 pounds of baby formula from Germany arrives in U.S.

Biden says ‘everybody’ should be concerned about monkeypox cases