The Democratic presidential nominee opened up the town hall taking President Donald Trump to task for his handling of the coronavirus pandemic and offering his own answers.

The former vice president said there should have been earlier national standards on how to limit the spread of the virus, including a mask mandate.

When asked whether he would mandate for all Americans to take a COVID-19 vaccine once one’s available, Biden said “it depends on the state and the nature of the vaccine when it comes out and how it’s being distributed.”

Biden acknowledged such a mandate would be difficult to enforce completely, comparing it to measles vaccines required by schools.

“We should be thinking about making it mandatory,” he said, adding that he’d ask governors, mayors and council members to encourage and mandate vaccines.

The former vice president’s appearance began at 8 p.m. EDT on ABC News and was expected to last for 90 minutes. In addition to watching their local ABC channel, viewers can stream the event on ABCnews.com or the ABC mobile app.

The town hall took place at the National Constitution Center in Philadelphia.

Biden signed up for the ABC event after Trump refused to participate in a virtual town hall-style debate that was supposed to take place Thursday night. The Commission on Presidential Debates made the debate virtual after Trump was diagnosed with COVID-19.

Trump called such a virtual debate “ridiculous” and a “waste of time.”

The final debate between Trump and Biden is scheduled for Oct. 22 at Belmont University in Nashville. 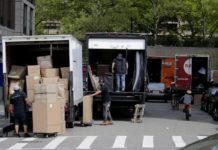