Feb. 9 (UPI) — President Joe Biden and Treasury Secretary Janet Yellen will meet Tuesday with some of the country’s leading chief executives to talk about his coronavirus stimulus plan currently being considered by Congress.

Those attending the meeting include Tom Donohue of the U.S. Chamber of Commerce along with Jamie Dimon of JPMorgan Chase, Doug McMillon of Walmart; Sonia Syngal of Gap, and Marvin Ellison of Lowe’s.

The meeting comes after a disappointing January jobs report that revealed that only 49,000 jobs were created with an increasing number of people giving up on their job searches. Most economists had predicted the economy would create 50,000 to 100,000 jobs.

The hefty $1.9 trillion stimulus package includes $1,400 checks to most U.S residents, funds to create vaccine centers and help for local and state governments to keep running and a $15-per-hour minimum wage.

The Chamber of Commerce has spoken out against the minimum wage hike and increasing the unemployment weekly benefits from $300 to $400, while expressing concern over the current $1 trillion annual federal deficit.

The bill is currently facing stiff opposition from House and Senate Republicans. That opposition is forcing the Democrats to consider passing the bill through what is called budget reconciliation to avoid a filibuster in the Senate.

“The president — his first priority is getting relief to the American people,” White House press secretary Jen Psaki said Monday. “I don’t think the American people are particularly worried about how the direct relief gets into their hands. If [reconciliation] is the process it moves forward through, which seems likely at this point, the president would certainly support that.” 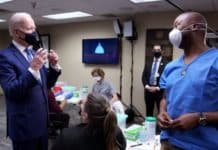 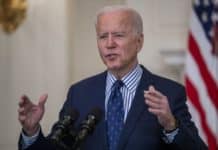