He submitted the paperwork to be included on the Alabama Democratic primary, which takes place March 3. The move comes after days of rumors that Bloomberg would join the field of 16 other Democrats on the Alabama ballot.

An unnamed source familiar with the situation told The Hill, though, that the billionaire businessman wasn’t sure whether he’d actually run for president despite the filing. He’s made no official announcement on the matter.

Bloomberg’s adviser, Howard Wolfson, told CNN that he plans to skip the first four primaries in the new year.

“If we run, we are confident we can win in states voting on Super Tuesday and beyond, where we will start on an even footing,” he said.

“But the late timing of our entry means that many candidates already have a big head start in the four early states, where they’ve spent months and months campaigning and spending money. We have enormous respect for the Democratic primary process and many friends in those states, but our plan is to run a broad-based, national campaign.” 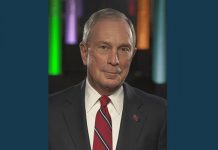