PALM BEACH, Fla., April 23 (UPI) — The boat said to have been carrying missing teens Perry Cohen and Austin Stephanos has reportedly been found.

Found in March by a research vessel headed to Norway 100 miles off the coast of Bermuda, the 19-foot Seacraft still had some of the boys’ personal items, including an iPhone belonging to 14-year-old Stephanos, according to the Palm Beach Post.

The items, including two fishing rods and two tackle boxes, will be sent to the Florida Fish and Wildlife Conservation Commission, Cohen’s parents said.

“This has been nine months now of pain and suffering. We’d like to have some sort of closure,” Cohen’s father, Nick Korniloff, said.

The research vessel Edda Fjord, which found the boys’ boat, took it to Norway, the Post reported. The vessel’s captain notified the Coast Guard when it found markings linked to West Palm Beach, WPBF reported.

Cohen and Stephanos went missing in the Atlantic Ocean July 24, 2015 after leaving the Jupiter inlet in South Florida. They reportedly told relatives at the time they were going on a fishing trip.

The boys’ families called off search efforts after two weeks were spent combing 50,000 square nautical miles of the southeastern coast of the United States up to South Carolina. The families of the teens previously received roughly $480,000 in donations to continue their private search before it ended. 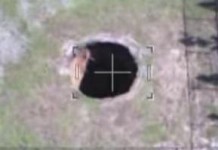 Florida Sinkhole Opens Back up Two Years After Swallowing Man