Sept. 3 (UPI) — One of the four missing people in a boat collision on the Colorado River along the Arizona-California border was recovered about 36 hour later on Monday morning, authorities said.

The victim was as identified as Christi Lewis, 51, from California, the Mohave County Sheriff’s Office of Arizona said in a Facebook post.

The Sheriff’s Office, which found the body at 7:30 a.m., said it “will continue to patrol the Colorado River until all the unaccounted for passengers are located.”

Two boats collided around 8 p.m. Saturday between Pirates Cove and Topock Marina in Needles, Calif., and north of Lake Havasu, Ariz. One woman was airlifted to University Medical Center in Las Vegas in critical condition and nine other people were transported to area hospitals by ambulance.

The Hallet boat with 10 people aboard was northbound and a Sleek Craft boat, occupied by six people, was southbound when they collided head on. Both boats sank and all of the occupants were ejected into the water, the Sheriff’s Office said.

The boats were traveling about 50 mph when they hit head-on, according to an emergency dispatcher whose report was released Sunday.

It has not been determined when speed played a factor in the crash, Anita Mortensen, a sheriff’s spokeswoman, said. 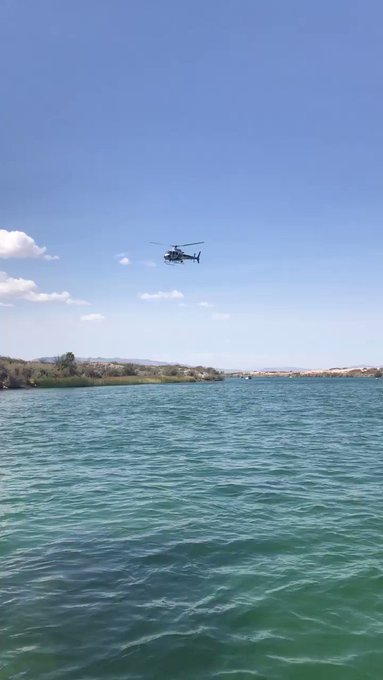 @sbcountysheriff Aviation 40King6 continuing the search of the Colorado River in the air as the dive team continues underwater searches. @CORiverStation