LINDEN, N.J., Dec. 21 (UPI) — The man accused of setting off bombs in New York and New Jersey in September pleaded not guilty Tuesday to attempted murder of five police officers and other charges.

Ahmad Khan Rahimi, accused of trying to kill the officers during his capture in Linden, N.J., appeared for the first time in a state courtroom.

The Afghan-born U.S. citizen from Elizabeth, N.J., faces separate federal charges for two Sept. 17 bombings. The first explosion occurred along the route of a Marine Corps charity race in Seaside Park, N.J. No one was injured. The second explosion, in the Chelsea neighborhood of Manhattan, injured 31 people. The next day, multiple unexploded bombs were discovered inside a suspicious package at the Elizabeth train station.

On Oct. 13, public defender Peter Liquori entered the pleas on Rahimi’s behalf as he appeared via a video link from his hospital bed in Newark, N.J.

On Tuesday, Rahimi, 28, wore a bullet-proof vest and a prayer cap during his appearance in the courtroom. He also wore handcuffs shackled to a chain around his waist and shackles around his ankles.

He was helped by a deputy because he is recovering from multiple gunshot injuries.

Prosecutor Ann Luvera said during the four-minute hearing they do not intend to cut a plea deal with Rahimi.

The trial is scheduled for March 27, but Rahimi’s federal public defender, Peggy Cross-Goldenberg, said that the defense could not be ready by then because it was awaiting material from the government that it had requested in the discovery process.

Rahimi pleaded not guilty on Nov.17 to all of the federal charges after he was indicted the day before. 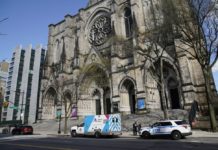