The illegal moonshine can be purchased in a Muslim-dominated region that has partly banned alcohol sales, the BBC reported.

Opponents of the law had previously said the regulation would spur people to consume bootlegged products.

The deaths occurred after the victims purchased the distilled spirits from a couple in Sleman, north of Yogyakarta city. Several people have also been hospitalized.

Of the casualties, about 17 people were university students, who died after drinking the locally made liquor “oplosan,” The Jakarta Post reported Sunday.

A local police chief said each victim had died between Thursday and Saturday, after intensive care at hospitals failed to provide a cure.

“The victims were rushed to the hospitals after they suffered from severe pains from consuming oplosan in several places in Sleman, Bantul regency and the Yogyakarta municipality,” the chief said.

Moonshine has been cited as a cause of death at previous New Year celebrations.

More than a dozen Indonesians died in 2014 during festivities, and 25 people, including four foreigners, died after drinking palm wine laced with methanol in Bali in 2009.

Police said the alcohol sample was sent to a forensic laboratory to confirm its contents, and other investigations are underway to determine whether the deaths were caused by substances or from excessive drinking.

One illicit alcohol producer who was arrested said he drinks the spirits regularly, but never had any medical issues.

“He also claimed none of his regular customers died due to his product,” Police Chief Yulianto said. 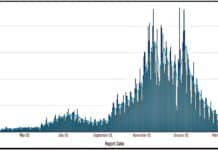