Feb. 18 (UPI) — “Born to be Blue” is the name of a JetBlue plane but it’s quite fitting after a baby boy was born on that jet during a flight from San Juan, Puerto Rico, to Fort Lauderdale, Fla.

“Giving storks a day off. With mom’s okay, we’d like to rename ‘Born To Be Blue’ after our newest baby blue and our youngest customer ever. More baby shower gifts to come!” the airline posted on Twitter on Saturday about the flight Friday night.

Ironically one day earlier — Valentine’s Day — a woman aboard a JetBlue flight from Fort Lauderdale-Hollywood International Airport headed for Las Vegas was removed after she became angry because she was seated next to a child. She spit at a passenger and yelled expletives as was escorted off the plane by Broward County Sheriff’s Office deputies, WFOR-TV reported.

It was happier times on Flight 1954 that departed from San Juan’s airport and landed with the extra passenger.

During the two hour and 50-minute flight, crew and medical professionals on board helped an unidentified mother deliver the airline’s “youngest customer to date,” according to the airline.

Medical personnel met the 162-seat Airbus A320 plane in Fort Lauderdale when it landed at 11:24 p.m., according to FlightAware.

“We’d like to thank the crew and medical professionals on board for their quick action under pressure, and wish the new mother and son all the best,” a statement to the Miami Herald read. “Flight 1954 was operated on aircraft N523JB, coincidentally named, ‘Born To Be Blue.’ ”

The airline puts “blue” in its plane names.

“Each aircraft delivery is kind of like welcoming a new baby into the family,” Tamara Young, the airline’s corporate communications manager told Conde Nast in 2016. On our first day of operation [in 2000], an Airbus A320 dubbed BlueBird set out on JetBlue’s first revenue flight from JFK to Fort Lauderdale. Since then, it’s become a tradition to name every plane as it is introduced into our network.”

Yaqui Ramos, with JetBlue ground operations, posted photos on Twitter after arriving in Fort Lauderdale, including photos of medical personnel looking at the baby. 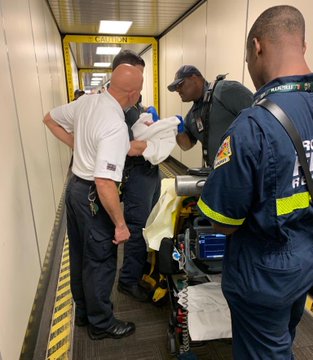 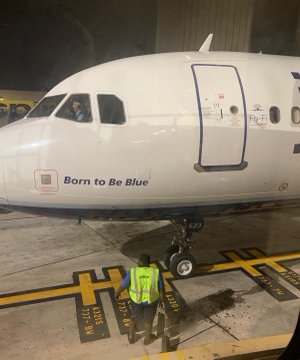 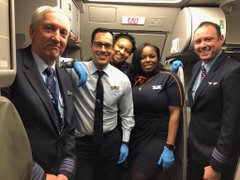 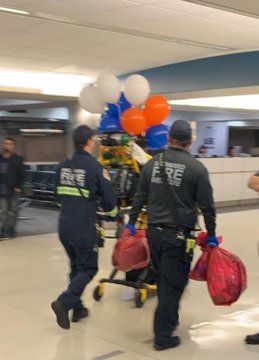 What an amazing coincidence our brand NEW #BabyBlue born at #BornToBeBlue aircraft @JetBlue @HelloJetBlue Thank you to our amazing IF crew and Angie AO Leader for suprising and delight this new mom!#Culturepic